While the Waters family was busy making paper boats in Troy, near-by in Hudson, NY "paper" wheels were being manufactured for railroad cars. These wheels were in fact, not made totally from paper but consisted of a metal rim (or tire), a metal hub that contained the axle bearing, and a compressed paper disk that connected the two together. A ring of bolts

connecting rim to paper and paper to hub which assured the mechanical integrity of the wheel. Large metal discs covered the paper, but only served as protection from the elements, as the load was actually carried from hub to rim by the paper disk.

As you might guess, paper wheels were not immediately accepted, but eventually became standard equipment on Pullman cars during the late 1800's and found their use elsewhere as well.. They were claimed to provide a quieter and smoother ride than conventional cast iron wheels. Hence the application to Mr. Pullman's "sleepers."

He began the wheel business as the American Paper Car Wheel Company in Pittsford. Initial tests on the Rutland and Burlington Railroad in 1868 were, to most people's surprise, a complete success. In 1870 Pullman ordered a set of wheels and after a successful trial period they were eventually incorporated as standard items on all Pullman cars. The volume of business with Pullman caused Allen to set up a factory in the company town of Pullman, Illinois. Others adopted the wheel and by 1886 there were reported to be 115,000 paper wheels in use on American railroads.

The main plant however, was established in Hudson, NY in 1873. Initially a single large brick building was built, listed as being at "South Bay" in the 1873 Hudson city directory. A later atlas of the town shows a number of car wheel factory buildings in the same area. It must have been a convenient location directly on a small bay off of the Hudson River and directly adjacent to the New York Central rail line. One can guess that this convenience was at least partially responsible for the move from Vermont.

Success of the paper wheel drew imitators and variants upon the basic design concept. These included wheels with various cushioning materials, such as rubber or hemp, at some location between hub and rim. In 1897 the nine major manufacturers of "tired" wheels, including the Hudson company, combined as the Steel Tired Wheel Company. As this included all major manufacturers, an effective monopoly was created which continued to operate for at least a decade.

The demise of paper wheels came after the turn of the century, in large part because railways switched from wood to steel cars. These were considerably heavier and produced far greater braking loads on the wheels. There had been a number of accidents attributable to wheel failure in the late 1800's, but Pullman and 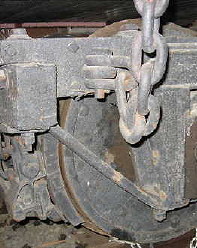 others had remained firmly committed to their use, blaming failure on poor maintenance. However, by 1915 paper wheels were declared unsafe by the Interstate Commerce Commission and in 1923 the Allen plant in Pullman Illinois was abandoned. While no wheels remained on the main lines, they were still in use as late as 1960 as shop trucks at the St. Louis Car Company. There are a few around today on stock in museums. For example, paper wheels are still installed on the car "RICO" at the Colorado Railroad Museum, in Golden, Colorado. If you are there and take a look, you can easily see the bolts holding the rim to the paper "disk". The paper disk itself is covered by a protective metal plate. This is shown in the photo at the left of one of the RICO wheels. (Thank you Phil Johnson of the Colorado RRM).

The factory and the methods of manufacture for the Pullman factory are described in some detail in an 1882 issue of Scientific American; the factory at Hudson was said to be similar. Each employed approximately 80 men and was producing more than 25 wheels a day.

The paper portion of the wheel began as common commercial straw board, cut into circles slightly larger than required for the eventual product. Three disks were glued together with flour paste and the triple sheets were piled together into a stack three to four feet tall. These were compressed by a 650 ton hydraulic press and then dried. The process was repeated, this time gluing three sets of the three-layer sandwiches together. After a third pressing, a disk four to five inches was obtained which was suitable for the finished wheel. The disk was turned to proper size on a lathe, painted with two coats of paint, and then pressed into the rim of the wheel. The hub was also pressed into place and the bolts and iron face plates were attached. 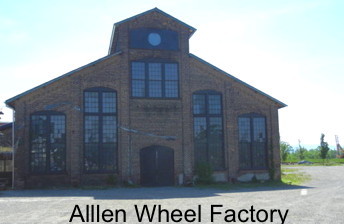 If you visit Hudson, NY today there is one remaining brick building on the site of Allen's factory, on Front Street a bit south of the Amtrak station. If you're southbound through Hudson on Amtrak look out the widow on the East (left) side immediately after leaving the Hudson station and you'll see across a marshy area that once was "South Bay". The site currently is operated as Basilica Hudson, a non-profit performance and events site - a nice recycling of a relic from the age of paper.

(If this subject tickles your fancy, you might like to consult J. H. White's classic,"The American Railroad Passenger Car". Look for "wheels,paper" in the index.)